Get to Know David O. Brown 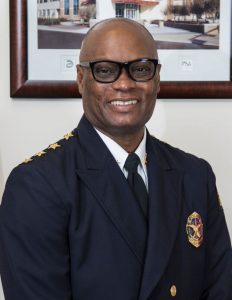 David Brown is a former chief of the Dallas Police Department, who is nationally renowned for his community policing efforts. Born and raised by a single mother, Chief Brown grew up in the city’s South Oak Cliff neighborhood. During his tenure, he reduced crime more than any other chief in the department’s history. Officer-involved shootings declined by more than 40% and excessive force complaints dropped by more than 70% to their lowest levels on record. At the time of his retirement in 2016, Brown was the longest-serving – and most beloved – Dallas police chief in modern times.

Chief Brown rose to national prominence following the tragic events of July 7, 2016, when a gunman targeted and killed five Dallas police officers amid an otherwise peaceful protest against police brutality. Chief Brown’s leadership calmed the city and nation, calling for protesters to become part of the solution by applying to join the police department.

Chief Brown became a police officer in 1983 with the goal of fighting the crack cocaine epidemic in his old neighborhood. Over his 33 years in the Dallas Police Department, he was a patrolman, crime scene detective, SWAT team member and leader, internal affairs detective and assistant chief. The New York Times reported that Brown “earned a national reputation as a progressive leader whose top priority is improving relations and reducing distrust between the police department and the city’s minority residents.” Having quit college during his senior year to join the force, he completed his bachelor’s and master’s degrees, while being promoted through the department’s ranks.

Chief Brown’s life and career have been marked by personal tragedy, including the death of his brother to drug-related violence, the murder of his former partner, and the loss of his mentally ill adult son in a shootout with police that also left an officer dead.

Following his career of public service, Chief Brown was Managing Director of the Investigations and Disputes practice at Kroll, a New York security consulting firm. He now serves as a contributor to ABC News and an adviser to Texas organizations dedicated to early childhood education, mental health treatment and assistance for the formerly incarcerated. Brown authored a book, Called to Rise: A Life in Faithful Service to the Community That Made Me, in 2017.